Heavy exchanges of rocket fire and air strikes and riots in mixed Jewish Arab cities on Wednesday raised fears that deadly violence between Israel and the Palestinians could escalate into a “full-scale war.”

Israeli Defense Minister Benny Gentz ​​has vowed to launch more attacks on Hamas and other Islamic militant groups in Gaza, saying he would bring “complete and long-term silence” before considering a ceasefire.

“This is just the beginning,” warned Prime Minister Benjamin Netanyahu. “We will give them blows they never dreamed of.”

Gaza militants have fired more than 1,000 rockets since Monday, with the Israeli military saying hundreds of airstrikes have been carried out on Islamist groups in the crowded coastal siege of Gaza.

At least 56 people, including 14 children, have been killed in the deadliest clashes in Gaza in seven years since Monday, including six Israeli soldiers and an Indian citizen.

The unrest began on Saturday in Jerusalem’s Al-Aqsa Mosque, which is sacred to both Muslims and Jews.

“We are moving towards a full-scale war,” warned the UN envoy to the Middle East, Tour Veniceland, as world powers warned of a growing crisis. 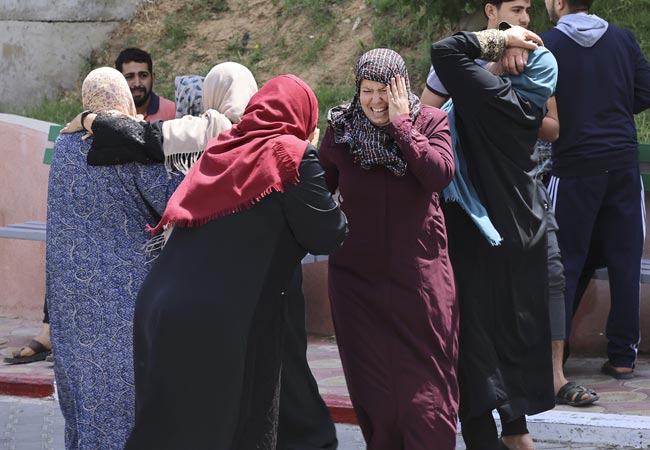 The UN Security Council convened another emergency meeting without agreeing on a joint statement due to opposition from Israel’s ally, the United States.

Netanyahu declared a state of emergency in the mixed-Jewish Arab-Israeli city of Lod, where police said “some Arabs rioted” and authorities later imposed a nighttime curfew.

Israeli President Raven Rivlin condemned in the strongest possible terms what he called a “pogom” in which “an angry and bloodthirsty Arab mob” wounded people and attacked Jewish holy sites. Was attacked

The Israelis need to be “ready and armed, strong and determined, to defend their home,” Revlin said.

The Israeli military says Palestinian groups, particularly Hamas and Islamic Jihad, have fired more than 1,000 rockets, including hundreds in Tel Aviv, where air sirens have been sounding overnight.

The military says 850 of them have been targeted in Israel or blocked by Israel’s Iron Dome air defense system, while the rest have collapsed inside Gaza.

Israel has carried out hundreds of airstrikes on Gaza, a 2 million-strong strip controlled by Hamas, which the military has described as a terrorist hotbed.

Hamas said several of its top commanders had been killed in Israeli attacks, including its military chief in Gaza City, Bassim Assisa. Israel’s internal security agency, Shin Bet, also identified three other Hamas militants who it said had been killed.

Its leader, Ismail Haniyeh, threatened to step up the attack, warning that “if Israel wants to increase, we are ready to do so.”

British Prime Minister Boris Johnson has called on both sides to “step back from the brink”.

French Foreign Minister Jean-Yves Le Drian said “everything must be done” to avoid a new conflict in the Middle East.

Secretary of State Anthony Blanken said a US envoy would travel to meet with Israeli and Palestinian leaders to “end the violence.”

In Gaza City, after a 12-story building was destroyed in an Israeli airstrike, people buried under rubble said Hamas was a residential building. It was also known in the offices of several Hamas officials.

Five members of the same family were killed in an Israeli strike in northern Gaza on Tuesday, including young brothers Ibrahim and Marwan, who were filling straw sacks at the time.

We were laughing and happy when they suddenly started bombing us. “Everything around us caught fire,” his cousin, also known as Abraham, told AFP.

“I saw my cousins ​​get better and fall apart,” said the weeping 14-year-old.

A man and a girl were killed in a rocket fire from Gaza on Wednesday in the central Israeli city of Lod. Israel identified one of the dead as 16-year-old Nadine Awwad, an Arab Israeli.

His cousin, Ahmed Ismail, told the broadcaster Kan that he was close to Nadine when he was killed along with his 52-year-old father, Khalil Awad.

“I was at home, we heard the sound of rockets,” Ismail said. “It happened so quickly. Even if we wanted to run away, we didn’t have a safe room.

An Israeli woman has been killed in a rocket attack on a rations near Tel Aviv. Rockets fired by militants killed two women Tuesday in the town of Ashkelon, near Gaza, which Hamas threatened to turn into “hell.”

The crisis erupted last Friday as weeks of tensions escalated and Israeli riot police clashed with a crowd of Palestinians at the Al-Aqsa Mosque in Jerusalem.

According to the Palestinian Information Center, the night in East Jerusalem erupted and more than 900 Palestinians were injured.

The aggression has sparked outrage over the eviction of Palestinian families from the Sheikh Jarrah area of ​​Jerusalem.

There have been large demonstrations in solidarity with Palestinians around the world, including in Muslim-majority countries, including the United Kingdom and South Africa, as well as Kuwait, Lebanon, Oman, Pakistan, Tunisia and Turkey. AFP

Hamas has called on Pakistanis to speak out against Israeli atrocities against Palestinian Muslims.

The appeal was made by Bassim Naeem, a senior Hamas official, when he spoke to a private Pakistani news channel about the attacks in Gaza.

He confirmed the number of injured was 300. Naeem said the Israeli attack had intensified.

A Hamas official sent a message to Pakistanis asking for their prayers. He appealed for relief work and said, “Happy Eid to the people of Pakistan, pray for us.”